The Best City Beaches In The Mediterranean 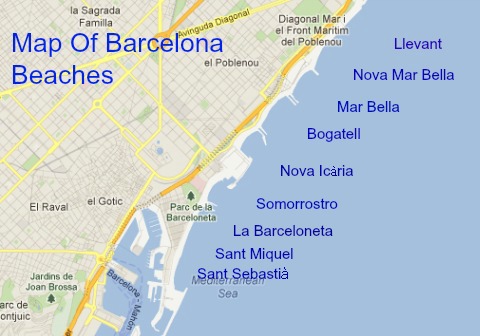 Map of Barcelona Beaches
3Save

The fantastic thing about Barcelona Beaches is that most are within walking distance of the Barcelona City Centre or, at worst, a short metro journey or bus ride away.

Distributed between La Barceloneta and El Poblenou, there are 9 beaches in Barcelona, and normally with blue flag status, its over 4 km of golden sands have become one of the city’s major attractions.

So much so that Barcelona was recently voted Best Mediterranean Beach City by the prestigious magazine National Geographic.

It’s also worth remembering that beginning at Badalona, which is within a Barcelona Metro journey, and continuing north along the Costa del Maresme there are some even better beaches.

All of these beaches are within easy reach of the city centre by Barcelona Local Train, as are the southern beach resorts of Castelldefels and Sitges on the Costa de Garraf.

The truth is that that Barcelona is not only a great city for history, food and nightlife but it’s also the Number One beach metropolis on the Mediterranean.

Perhaps I’m showing my age but until the 1992 Olympic Games Barcelona could hardly be described as a beach city, as all it possessed was a rather scratty section of dirty sand in the barri of La Barceloneta.

These beaches have been completely cleaned up, and from south to north starting at the emblematic Hotel W Barcelona, are as follows:

All these beaches are accessible by bus and La Barceloneta Metro station on the Yellow L4 Line – is just a short walk away.

Bogatell Beach in El Poblenou
3Save

Nearly thirty years later, when I visit, the section of coastline on north of the Olympic Port, it still seems nothing short of a miracle.

Until 1992, what are now golden sands were the lined with factories, and Barcelona famously ‘had its back to the sea’.

If you’re looking for a nudist beach in Barcelona, you should go to Mar Bella Beach, which although not exclusively homosexual, is also popular with gay men.

This whole section of Barcelona coast is well-served by the Yellow L4 Metro Line as well by public bus services and Barcelona Trams.

The Coastline North Of Barcelona

The Coastline North of Barcelona
3Save

The beaches of Sant Adrià de Besós begin on the other side of the Parc del Forum, and slightly further up the coast we have Badalona, which is just 10 minutes by train and is also on the Barcelona Metro system.

The coast south of Mataró, which includes Montgat, El Masnou, Premià, Vilassar and Cabrera is nice enough, but the northern section is a muchbetter holiday destination.

The Coastline South Of Barcelona

The Coastline South of Barcelona
3Save

The beaches immediately south of Barcelona, much wider and flatter with long stretches of golden sands.

Castelldefels is the best known beach resort close to Barcelona, but El Prat de Llobregat has a surprisingly good beach and Viladecans is actually quite select.

Even further south, we come to the charming Sitges, but in many respects Vilanova i la Geltrú and Cubelles are just as nice but less touristy.

So the possibilities of Barcelona beaches within the city, and when it comes to beaches near Barcelona, the offer is even better.

All the beaches mentioned in this article are in Barcelona Province.

As the Barcelona Travel Guide progresses, I may also include beaches further north of Barcelona on the Costa Brava and further south on the Costa Daurada.

Which Beach do you think is the Best Beach in Barcelona and Around?

If you are a regular beach-goer in Barcelona, let us know your opinion. We’d also love to hear any anecdotes and advice. Help Barcelonas.com readers to make better choices about the beaches they visit. I’m sure they’ll appreciate it!