Hop On Hop Off Tours Of The City

The Barcelona Sightseeing Buses offering Hop On Hop Off Tours that can be completed over one or two days with various routes and accompanying audio guide are a perfect introduction to the city.

In fact there are two Sightseeing Buses that offer Hop On Hop Off Tours of the City – the Bus Turístic run by the Barcelona public transport company, TMB, and the Barcelona City Tour run by Julià Travel – and the truth is there is very little to choose between them.

Both offer sightseeing tours of Barcelona in open-top double-decker buses with an audio guide in various different languages and are very similarly priced.

The real advantage of both Hop On Hop Off Tours is that you can see the city at your own pace.

Both the main lines of the Bus Turístic and Barcelona City Tours cover similar routes starting at Plaça Catalunya and taking in major sights such as The Cathedral, the Sagrada Familia, FC Barcelona’s Camp Nou Stadium, the Mountain of Montjuïc as well as the Port and the Barcelona City Beaches at Barceloneta and Port Olímpic.

These major routes all take around two hours to complete and can be approached in different ways.

Firstly, you can just sit on the bus, take the complete sightseeing tour and listen to the audio guide explanations.

This is a great introduction to Barcelona and I’m sure the trips will give you plenty of ideas about things to see and do during the rest of your stay.

Alternatively, you can study the routes offered by the Barcelona Sightseeing Buses before you take the the Hop On Hop Off Tour and then do just that.

If you already know what you want to visit, you can hop off at a particular sight, spend some visiting or even just have a walk around or a drink and something to eat and then hop back on again when you’re ready to continue your trip.

Why Book Your Barcelona Sightseeing Bus Ticket In Advance?

I live in the Eixample and so I walk past the Hop On Hop Off Bus Tickets booths very regularly on my way to give my own A Walk Down The Ramblas Guided Tour.

Out of season the queues are not too bad but during the summer months or busy weekends such as Easter or La Mercè Festival, the lines are enormous.

I really pity those poor people having to wait for so long and I’m sure some of the pleasure is taken out of the trip before you get on the sightseeing bus.

Obviously, if you book your ticket online, you’ll be saved all this hassle. 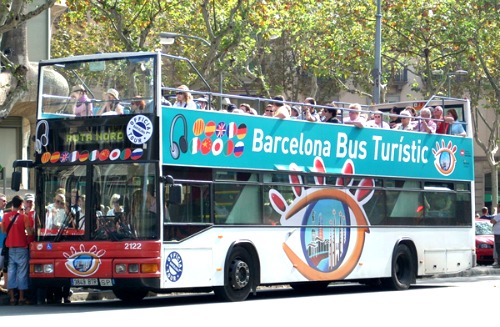 The Bus Turístic is the original Hop On Hop Off Sighseeing bus and has been going over 25 years now.

It offers two routes throughout the whole year and the first bus of both lines leaves Plaça Catalunya between 9 and 9.30am depending on the season and then with a frequency of between 5 and 25 minutes until 7pm in winter and 8pm in summer.

The red route covers the city centre more or less whilst the blue route goes up the hill and takes in important sights such as the Sagrada Familia, Park Güell and FC Barcelona’s Camo Nou Stadium.

Between April 1st and November 1st, there’s also a green line, which takes about 40 minutes and is basically the beach run.

Click Here To Book Your Tickets For the Barcelona Bus Turístic

The Barcelona Public Transport company, TMB put up a major fight when Julià Tours launched their own Hop On Hop Off Barcelona Sighseeing Bus, which ended in court.

However, the competition has been good for both services as the buses have been modernised and more care is taken over customer service.

As a private operator competing with the public transport company, Julià Tours have to provide something special and by all accounts Barcelona City Tours are truly excellent.

They also offer two routes – an East Route and a West Route, which join up at Plaça Catalunya and along Passeig de Gràcia.

The Barcelona City Tours Summer Special is a Walking Tour of Gaudí’s fabulous Park Güell at 12.30 between April and November at an additional cost.

Click Here To Book Your Tickets For Barcelona City Tours