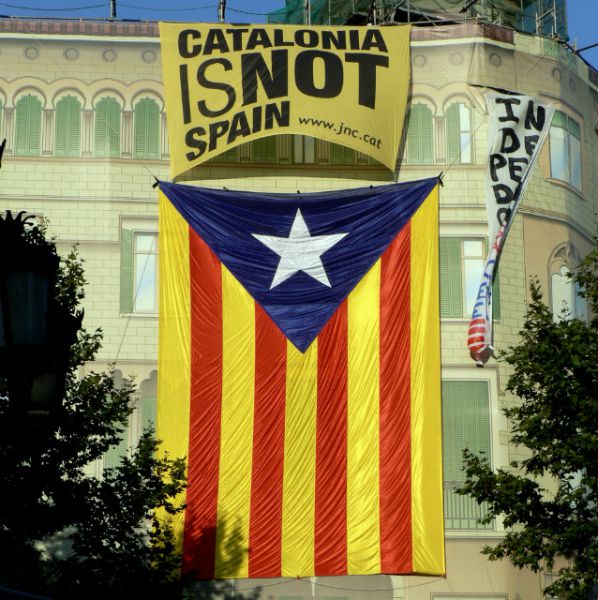 Catalonia Is Not Spain Estelada
Save

Although the Catalan Independence Process has made a great deal of progress over the last three years, the journey has often been difficult and it seems very likely that the road ahead will be far from easy.

Catalans now have their sights set on the elections to the Parliament of Catalonia on September 27th 2015, which, as the Spanish government has blocked all attempts to hold a referendum on Catalan independence, have acquired a plebiscitary character.

These elections will close President Artur Mas’s second shortened legislature, which began in December 2012 and followed a first term of office, which was also shortened and only lasted two out of its four years.

People often locate the start of the Catalan Independence Process at the multitudinous demonstration on La Diada, the Catalan National Day, of September 11th 2012 but in reality the mobilisation really began in earnest with the demonstration called by Òmnium Cultural, against the decision of the Constitutional Court to limit the Estatut on July 10th 2010.

However, this is the background to the current upsurge in pro-independence feeling, and it makes sense to begin this chronology with La Diada 2012.

Set against a backdrop of tense relations between the Generalitat of Catalonia and the Spanish government in Madrid and an economic crisis that was reaching its peak, one and a half million people demonstrated in Barcelona under the slogan “Catalonia, New European State” for La Diada, the Catalan National Day, on September 11th 2012. This massive demonstration was what effectively set the current Catalan independence process in motion.

Just nine days later, on September 20th 2012, the President of Spain, Mariano Rajoy, and the President of the Catalan Generalitat, Artur Mas, met in Madrid to discuss the fiscal pact, through which the Catalan president proposed improvements to the tax relationship between Catalonia and central government. On leaving the meeting, the Catalan president said, “The negotiation on the fiscal pact hasn’t gone well.” Five days later, Mas announced that he was bringing forward the elections to the Parliament of Catalonia to November 25th in order to find out the strength of support for the calls for Catalan independence seen on the streets on September 11th.

In spite of Artur Mas’s calls for a larger majority needed to give a democratic mandate to the calls for Catalan sovereignty, the election results were disappointing for his ruling Convergència i Unió (CiU) federation, which lost 12 seats and went from having 62 deputies to only 50 seats in the Parliament of Catalonia. Overall, though, the pro-independence parties gained more representation with Esquerra Republicana de Catalunya (ERC) winning 21 seats, 11 more than in 2010 to become the second force in the Parliament of Catalonia, and the Candidatura d’Unitat Popular (CUP) winning three seats, making a total of 74 deputies fully committed to independence for Catalonia.

Stability Agreement between CiU and ERC

Despite declining an offer from Artur Mas to form a coalition government, in December 2012, the leader of ERC, Oriol Junqueras, signed an agreement which would guarantee parliamentary stability and enable CiU to remain. This agreement was known as “the Pact for Freedom” and by signing it, the two parties committed themselves to holding a consultation to decide the political future of Catalonia at an unspecified time during the legislature.

The Declaration of Sovereignty

In January 2013, the Parliament of Catalonia declared Catalonia to be “a sovereign political subject” and as a result recognised the right of the people of Catalonia to decide their political future. The text was passed with the votes of CiU, ERC, ICV-EUiA and one of the CUP deputies. The Spanish Constitutional Court suspended the Catalan Declaration of Sovereignty a year later.

The Creation of the Pro-Sovereignty Bodies

What, by the spring of 2013, had simply become known as “The Process” took an important step forward with creation of the Council for National Transition on February 12th 2013 and with the constitution of the National Pact for the Right to Decide in July of the same year. The first created reports on how to move the independence process  forward with and plan Catalonia’s future as a separate sovereign state whilst the second brought together more than 1,500 bodies, all of which were in favour of the right to decide.

Taking its inspiration from “The Baltic Way” of 1989, for La Diada of 2013, the ANC and Òmnium Cultural organised a human chain that stretched the length of Catalonia. Hundreds of thousands of people participated and the line stretched from Portús on the French border to Vinaròs on the border with Valencia.

A Date and Question for the Consultation

With PSC completely disconnected from the process, on December 12th 2013, CiU, ERC, ICV-EUiA and the CUP agreed that the consultation would be held on November 9th 2014. In order to include all opinions and not leave anyone out of the process, the consultation would be based around a double-barrelled question. “Do you want Catalonia to become a state?” and “If the answer is Yes, do you want Catalonia to be an independent state?”

Spanish Congress Refuses to Allow Catalonia to Hold a Referendum

On April 8th 2014, Jordi Turrull (CiU), Marta Rovira (ERC) and Joan Herrera (ICV-EUiA) appeared before the Spanish Congress of Deputies in Madrid in order to request permission to hold a non-binding referendum in Catalonia. This was the Parliament of Catalonia’s last chance to appeal to Spanish law. The Spanish Parliament rejected the request for a transfer of competences to the Generalitat with 299 votes against and 47 in favour.

Rajoy and Mas Meet in Madrid

After the victory of ERC in the elections to the European Parliament in May and the confession of former CiU leader and Catalan president, Jordi Pujol, that he had undeclared money in foreign bank accounts, Mas went to Moncloa to tell Rajoy that if he blocked the consultation, Catalonia would be holding plebiscitary elections, in which the pro-independence parties would form a single list. The Spanish president refused to compromise and continued blocking the 9-N consultation.

For September 11th 2014, ANC and Òmnium Cultural once again organised a massive mobilisation in which more than 1.5 million people formed a massive V along the main Barcelona streets of Gran Via and Diagonal with its axis in Plaça de les Glòries. The purpose of the demonstration was to put pressure on the Spanish government to allow the consultation on November 9th, and the V stood symbolically both for Victory and Vote.

The Calling and Banning of the Consultation

On October 13th, following the suspension of the consultation by the Constitutional Court and after some marathon meetings with representatives of ERC, ICV-EUiA and the CUP, Mas decided that the idea of holding a consultation was unfeasible and proposed to hold what he called a participative process. The ecosocialists of ICV were at the point of withdrawing their support for the process, whilst ERC and the CUP were extremely annoyed by the proposal. The united front on the right to decide was at breaking point until finally all parties agreed to give their support to the participative process.

Although the Generalitat was obliged to withdraw the institutional campaign in favour of the participative proces and in spite of a second contestation by the Constitutional Court, 9-N went ahead. Some 2.35 million Catalans went to vote at the polling stations and 1.8 million people voted in favour of independence for Catalonia. As a result, the Spanish Public Prosecutor brought charges against Artur Mas, vice-president Joana Ortega and Education Minister, Irene Rigau.

Once 9-N was over, the process began to lose its impetus. At the beginning of December, Oriol Junqueras rejected Artur Mas’s proposal of a single pro-independence list. After a month and a half of intense and often acrimonious negotiations, agreement was reached to set the date for the so-called plebiscitary elections for September 27th 2015. Mas, Junqueras and the pro-independence organisations agreed that the parties would contest the elections with three separate lists with a common point in the programme. This had originally been Junqueras’ idea and was considered a victory for ERC.

On March 30th, CDC, ERC and the pro-independence organisations signed the unified route map for the elections on September 27th. CiU and ERC agreed a Catalan Constitution would be drafted in 18 months and there would be a referendum before the proclamation of independence.

Unió’s Consultation and the End of CiU

After the Municipal Elections of May 24th, which resulted in a victory for the pro-independence parties despite CiU losing Barcelona, Unió began a debate, which would define its position regarding the independence process. On June 14th, an internal consultation was held, which was narrowly won by the party leadership, which favoured the right to decide but not Catalan independence. This provoked the break-up of the federation with Convergència, which had lasted for 34 years, and also caused a significant number of pro-independence members to leave the party.

On June 20th, after Unió had decided to stand separately for 27-S, Artur Mas gave a speech in Molins de Rei in which he brought back the possibility of a single pro-independence list. This time, he put the onus on the pro-independence organisations, the ANC, in particular, and calling for maximum possible unity. Finally, after another intense meeting on July 13th, ERC gave in agreed to form part of a single candidacy that would be called Junts pel Sí. The CUP decided to stand separately.

The Calling of Elections for September 27th 2015

In spite of Mariano Rajoy’s warning that “there will be no independence” and Spanish Justice Minister, Rafael Catalá’s, threat that Catalonia’s autonomy could be suspended, Artur Mas signed the decree dssolving parliament and calling elections for September 27th.

Elections to the Parliament of Catalonia – 27-S

The elections to the Parliament of Catalonia of September 27th 2015 were billed as plebiscitary elections and were a mixed success for the pro-independence parties. Junts pel Sí won 62 seats while the CUP won 10 making a total 72 pro-independence deputies out of 135, well above the absolute majority of 68. However, in terms of the vote together Junts pel Sí only polled 47.7% so they didn’t win a clear victory as far as the plebiscite was concerned. Having said that both Catalunya Sí que es Pot and Unió declared that they didn’t want their votes to count against independence so they didn’t lose the plebiscite.

The Declaration of the Beginning of the Independence Process

On October 26th 2015, Jordi Turull and Marta Rovira of Junts pel Sí and Antonio Baños and Anna Gabriel of the CUP tabled The Declaration of the Beginning of the Independence Process as a proposed resolution in the Catalan Parliament. The resolution was debated on November 9th and the radical document, which announced a break with Spanish legal jurisdiction, was passed by 72 votes to 63.