Gateway to the Catalan Pyrenees

Situated in the foothills of the Catalan Pyrenees, the comarca of El Berguedà is made up mainly of tiny mountain villages and is a testament to the wide variety of landscapes to be found in Barcelona Province.

In fact, most people would associate mountainous terrain with Lleida or Girona Province so it’s something of a treat to have the delights of the Pyrenees so close to Barcelona.

The comarca capital is the historic town of Berga, which has a population of around 17,000 and is famous for the Patum festival, coinciding with Corpos Christi in late-May or early-June each year.

The only other major towns in the area are Gironella and Puigreig, both with populations of less than 5,000, whilst the only other villages of note – Avià, Casseres, Cercs and Pobla de Lillet – all have fewer than 2,000 inhabitants.

Not surprisingly the main reason for visiting the Berguedà region isn’t its nightlife but rather its views and landscapes.

To be perfectly honest, I’m always amazed to find such wild and unspoilt countryside such a short drive away from Barcelona.

You can get to some of the larger towns by public transport but it is really worth hiring a car and stopping off in the tiny villages  and hamlets and searching out little-known Romanesque churches.

Probably your best bet is to book a hotel in Berga and explore El Berguedà from there.

If you’re staying in Barcelona and want to get a taste for the region there are a number of Day Trips to the Pyrenees on offer throughout the the whole, including trips to ski resorts during the season.

* The Hotel Search Box is pre-configured to give results in the Berguedà area because it’s in the centre of the comarca and also the capital. If you’re looking for Accommodation in Gironella, Puigreig or any other town in the area, please insert the name of the town in the Where? box. 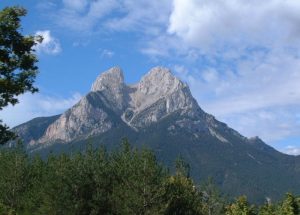 Most people come to the Berguedà for its extraordinary scenery, and given that it’s so mountainous it’s hard to imagine that it is actually part of Barcelona Province.

If you look at the map the municipalities below Berga, which are known as El Baix Berguedà, begin in the Central Catalonia depression and climb up into the foothills of the Pyrenees.

Above Berga in the Alt Berguedà, as the terrain gets more mountainous, the scenery becomes absolutely stunning.

Places like Pobla de Lillet or the magnificent water cascades at Castellar de’n Hug have to be seen to be believed.

Here you’re climbing the Sierras or Mountain Ranges of Cadí and Moixeró, which not surprisingly are also a Natural Park and Nature Reserve.

The highest points are the Serra del Verd, Ensija, Rasos de Peguera, which is also a ski resort, and the embematic mountain of Pedraforca, which as the picture shows means Forked Stone.

Gironella from the River
Save

El Berguedà along with Girona Province and the north of Barcelona is Catalunya Vella or Old Catalonia and you get a real sense of history here.

Furthermore, it was in the Pyrenees that the early Catalans holed up to sit out the Moorish invasion before coming down from the mountains to repopulate the Catalan Central Plain.

So its not surprising that there are many magnificent Romanesque and Gothic churches nestled in the valleys.

One of my favourite spots is the medieval town of Gironella, pictured here from the river.

With a population of around 2,000 inhabitants, Gironella is one of the larger towns in El Berguedà and makes an excellent base camp, where you can get something to eat or drink, before striking out into the Pyrenean countryside in search of architectural gems and breathtaking views.

If you understand some Catalan, you can find up to date news about El Berguedà on the Consell Comarcal del Berguedà Website.

The power of tradition in the comarca is not only seen in its architecture, but also in one of Catalonia’s most important festivals.

La Patum is celebrated in Berga for Corpus Christi, normally in late-May or early-June, and if you’re stay in Catalonia coincides with the festival, it really shouldn’t be missed.

The name comes from the Patum, Patum sound of the big drum that is used to anounce the start of the festivities and as the picture shows the Patum has always been a pagan festival of fire and madness.

The Patum remains pagan in spirit to this day but, as with many pre-Christian festivals, it was hijacked by the Catholic church and throughout the Middle Ages incorporated a unique procession of giants, devils, angels, moors, and other bizarre-looking characters.

It quite simply has to be seen to be believed and was declared Masterpiece of the Oral and Intangible Heritage of Humanity by UNESCO in 2005.