Barcelona Airport is Catalonia’s main airport and with over 34 million passengers a year is second only to Madrid Barajas in Spain.

The airport’s IATA code is BCN and its ICAO code is LEBL.

If you are travelling to Barcelona, Central Catalonia or one of the coastal resorts to the north or south of the city, you should make sure to book your flight to Barcelona El Prat.

This guide deals exclusively with Barcelona Airport and has the following sections:-

The rest of this page gives factual information about the airport

As you can see from the map below, Barcelona Airport is located just 12 km south of Barcelona City Centre between the towns of Viladecans, Sant Boi and El Prat de Llobregat, from which it take its name.

It is also very close to the popular seaside resort of Castelldefels and the C-32 takes you first to Sitges and then down to the Costa Daurada resorts.

If you are planning to Hire a Car, by taking the Autovía del Nordeste to Sant Boi, you can easily reach the inland towns of Barcelona Province and Lleida Province.

There is a RENFE train station at Terminal 2, which will take you to El Prat, where you can change for destinations south of Barcelona.

You will have to continue to central Barcelona for destinations north including France, and desinations in the rest of Catalonia and Spain.

Coach services to major Catalan and Spanish towns and cities are also available from Barcelona Airport.

As I mentioned above some unscrupulous low-cost airlines sometimes advertise Reus Airport and Girona Airports as Barcelona-Reus and Barcelona-Girona respectively.

The map clearly shows both airports are more than 100 kilometres from Barcelona capital.

Barcelona Airport is the second largest airport in Spain after Madrid Barajas Airport.

With over 34 million passengers a year, it is ranked 9th busiest airport in Europe and at certain times of the year is busier than Madrid Barajas.

Terminal 2 (T2) is Barcelona’s original terminal and is subdivided in T2A, T2B and T2C, which were originally three separate terminals.

Terminal 2 is about a quarter of the size of T1, and tends to deal with low-cost airlines.

Please note that the RENFE Train Station is at T2 and you will have to take the shuttle bus to get to T1.

Also if you’re flying with EasyJet, your flight will depart from T2C, which is a 10 minute walk or a bus ride from the RENFE station.

In both cases, you need to leave an adequate amount of time. 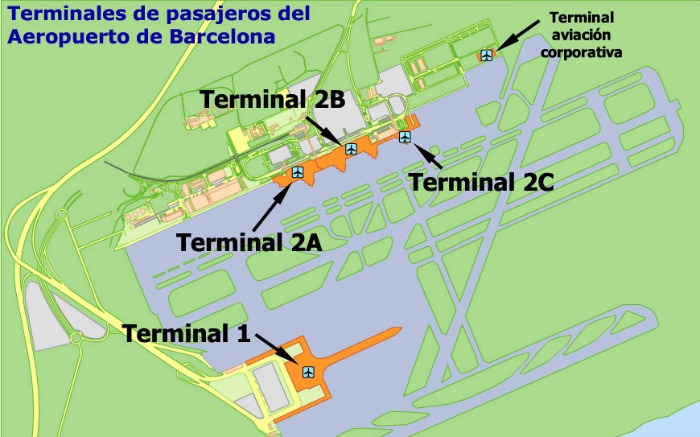 Until recently the majority of the destination airports with flights to Barcelona were all in Spain, Europe and North Africa.

However, since the opening of Terminal 1 in 2009, it has increasingly deserved its name as Barcelona International Airport with more flights to the United States, South America and the Middle East.