It All Depends on the Kind of Holiday You Want!

Deciding where to stay in Barcelona depends very much on the purpose of your visit and the kind of experience you want to have when you’re here.

Many tourists come to the Catalan capital for a City Break that can last anything from a weekend to ten days and the purpose of their stay in Barcelona is to enjoy the architecture and museums or just soak up the atmosphere and enjoy the food and drink.

Similarly, during the summer months, an increasing number of visitors are looking for a beach holiday that combines sun, sea and sand with the advantages of the sightseeing and nightlife of a big city.

Barcelona is also a major business and conference capital with the Fira de Barcelona hosting over 70 trade fairs each year as well as the Mobile World Congress, which is now held in nearby Hospitalet.

Each of these options implies different priorities and will affect your choice of location when booking accommodation in Barcelona.

So read on and use the links provided to explore the Barcelonas.com website before deciding on where to stay in Barcelona before booking your hotel, hostel or self-catering apartment. 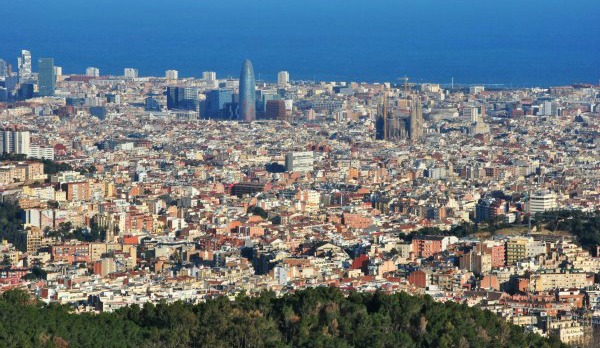 Barcelona Panorama from Tibidabo
Save

Carrer del Bisbe in the Barri Gòtic
Save

If you want to stay in Barcelona City Centre, you’ll probably be offered accommodation two areas.

However, both are large and varied districts and you easily can find yourself staying some way out, if you are not too careful.

As a general rule of thumb, staying anywhere around Plaça Catalunya is an excellent option.

The Ciutat Vella is literally the Old City of Barcelona and this is where the majority of the tourism is centred.

It comprises the neighbourhoods of:-

My preferred, and also the most central, area for accommodation is in the Barri Gòtic between the two main streets that cut through Ciutat Vella and take you down to the sea,  La Rambla and Via Laietana.

If you search for hotels near Barcelona Cathedral you’ll get the best of the Barri Gòtic both in terms of architecture and atmosphere.

I also like the area of Sant Pere, Santa Caterina i La Ribera and would recommend a hotel in El Born, which has become incredibly fashionable over the last few years and is perfectly located for both the city centre and the beach.

Casa Amatller and Casa Batlló on Passeig de Gràcia
Save

The Eixample is Barcelona’s other main City Centre District and if you’re looking for a central location, you should book your accommodation on or close to the two main thoroughfares of Passeig de Gràcia and Rambla de Catalunya.

This neighbourhood is known as La Dreta de l’Eixample and is where you’ll find the highest concentration of Modernista buildings.

However, my favourite part of La Dreta de l’Eixample for a stay in Barcelona is the Concepció neighbourhood, which combines a quiet local atmosphere, good bars and restaurants with magnificent architecture.

This means that you should try to book your hotel relatively close to Girona Metro Station.

Another favourite area is the Sant Antoni neighbourhood on the other side of Universitat Metro station.

Please bear in mind that although it is home to Antoni Gaudí’s Expiatory Temple of La Sagrada Familia, the neighbourhood of the Sagrada Familia area is actually not that special and is some way from the City Centre.

Bathers on Barceloneta Beach in Barcelona
Save

Much improved since the 1992 Barcelona Olympics, Barcelona Beaches are amongst the best City Beaches on the Mediterranean.

The old fishing district of La Barceloneta is a great place to stay and if you book a Hotel in La Barceloneta, you will have the beach on your doorstep and also be within walking distance of the City Centre.

A Hotel in El Poblenou next to Mar Bella beach offers a great holiday and I would stay as close to the Rambla de Poblenou as I could if I were you.

This part of the Sant Martí district is full of character and is only a couple of stops on the Yellow L4 Metro line from Jaume I and the Barri Gòtic, which means it’s also reasonably convenient for city centre sightseeing and and the bars and restaurants of La Vila Olímpica are only a short walk away.

Barcelona For Sports Events or Concerts

Obviously, FC Barcelona are the city’s major sporting attraction and thousands of visitors come to watch them play in Champions League or Spanish Liga matches.

With the Barcelona’s Camp Nou stadium in the pleasant Les Corts district, looking for accommodation near Camp Nou is a pretty good option.

However, with such an excellent public transport system, you’re probably better off looking for somewhere to stay in Barcelona City Centre and having a more authentic experience combining football and tourism.

Similarly, if you’re coming to see RCD Espanyol, I wouldn’t recommend a hotel in Cornellà – a rather dull and ugly suburb out near the airport.

Cornellà is at the end of the L5-Blue Metro Line so although it’s a bit of a trek, it is actually quite easy to get to so I’d recommend staying in the city centre as suggested in the city breaks section above.

If you’re coming for Formula One or MotoGP at the Circuit de Catalunya in Montmeló, once again, you can stay in Barcelona city centre

The nearby town of Granollers is one stop away on the RENFE Train and central Barcelona is only 30 minutes ride away on the same on the R2 and R2 Nord lines of the Rodalies Barcelona Local Train Service.

However, if you want to take in all the training sessions and be at the ractrack from dusk till dawn, you might be better advised to book a hotel near Montmeló.

As far as concerts are concerned, most of the big bands play at Palau Sant Jordi or the Olympic Stadium both of which are on Montjuïc so anywhere close to Plaça Espanya is definitely a good option.

Obviously, Barcelona is an important centre for business with many multinational companies as well as an ever-growing array of international conferences.

Where you stay in Barcelona will inevitably depend on the business you intend to do, but the main areas are the Fira de Barcelona, the Fira de Hospitalet and the @22 Business and Technology District in Sant Martí.

For the Fira de Barcelona, you should check out Hotels close to Plaça Espanya and the offer of accommodation in Hospitalet is growing since it became the home of the World Mobile Congress this year.

However, I personally would stay close to Plaça Espanya once again or in the city centre and catch the Red L1 Metro Line, which has plenty of stops in Hospitalet, to wherever I needed to go.

Hotels in El Poblenou, which I mentioned in the beach section, are also in walking distance of @22 Technological Area, so you can easily combine business commitments with trips to the beach.