A Complete Guide to the Districts and Neighbourhoods 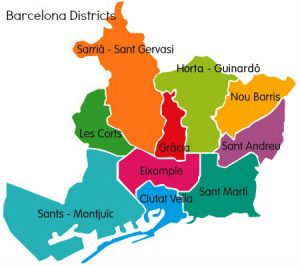 Map of the Districts of Barcelona

Before we start looking at each of the Districts of Barcelona individually, it’s important to point out the difference between the city’s Districts and its Barris or neighbourhoods.

The 10 Districts in Barcelona are administrative divisions similar to English boroughs, whereas the barris or neighbourhoods are areas within the district, each of which with its own identity.

The current division of Barcelona Districts was approved in 1984, and in 2009 the City Council complicated my definition somewhat by designating 74 administrative barris intended to improve the level of service.

Most of the current Barcelona Districts were originally outlying villages and were incorporated into the City of Barcelona at the end of the 19th century.

However, the 1984 divisions were quite arbitrary often cutting off sections of old municipalities and adding them to others for no particular reason and the 2009 designation of neighbourhoods can often only be described as eccentric.

In the following guide, I do my best to make the distinctions clear and also provide information on things to do and, if you’re a resident, where to get your paperwork done.

Barcelona Districts – One to Ten

As a tourist, you’re likely to spend most of your time in the City Centre Districts of Ciutat Vella and the Eixample.

However, Gràcia with its lovely squares and Sants-Montjuic with its Olympic mountain are definitely on the sightseeing itinerary.

Similarly, the seafront and beaches in Sant Martí are also on the tourist agenda and football fans will make a beeline for FC Barcelona’s Camp Nou in Les Corts.

I personally have a particular fondness for areas such as Sant Andreu, where I lived for over 20 years, and parts of Horta-Guinardó and Nou Barris, which whilst a million miles off the tourist map are full of charm and interest if you know where to look.

The Ciutat Vella literally means Old City and includes the original walled city of Barcelona and is the most ancient of the ten districts.

If you’re a tourist, this where you are likely to spend most of your time because it’s where you’ll find La Rambla, Barcelona Cathedral and the best-preserved Gothic city centre in Europe.

You should also take time to investigate the remains of the Roman Barcelona, which was originally known as Barcino, and walk round the Roman Walls if at all possible..

The Eixample means extension or enlargement and was built between around 1870 and 1930.

L’Eixample is where you’ll find the largest concentration of Modernista buildings, including Gaudí’s La Sagrada Familia, Casa Batlló and La Pedrera along with whole array of fine 19th century buildings by other great architects.

It is an enormous district but from a tourism point of view, you’ll find most of the places of interest close to Passeig de Gràcia in a neighbourhood known as the Dreta de l’Eixample.

The Sants-Montjuïc District of Barcelona is centred on a group of barris that once comprised the old industrial village of Santa Maria de Sants, an area now best-known as home to Barcelona’s main railway station, Barcelona Sants.

The Sants-Montjuïc also includes the mountain of Montjuïc with its Castle, Olympic Stadium and Museums and the heavily industrial Zona Franca-Port area, neither of which are officially designated as neighbourhoods because people don’t actually live there.

The barris that make up the District of Sants-Montjuïc are Sants, Hostafrancs, la Bordeta and Sants-Badal around the working-class neighbourhood of Sants and Poble Sec, la Font de la Guatlla, la Marina de Port and la Marina del Prat Vermell, which all nestle at the foot of Montjuïc.

Centred on the old municipality of Les Corts de Sarrià, the current District of Les Corts runs along either side of Avinguda Diagonal, which isthe main southern exit out of Barcelona.

The area just beyond Plaça Francesc Macià is mainly residential and difficult to distinguish from neighbouring Esquerra de l’Eixample.

My main reason for visiting Les Corts is to pay obligatory homage to FC Barcelona and their magnificent Camp Nou stadium.

If your interested in art and architecture the magnificent Monastery of Pedralbes is definitely worth a visit. as are Palau Reial and the Finca Güell.

The district of Les Corts is made up of the neighbourhoods of  Les Corts, La Maternitat i Sant Ramon and upmarket Pedralbes.

Sarrià was a very select village where rich Barcelonans spent their summers 150 years ago, and slightly closer to the city centre, the village of Sant Gervasi became a perfect commuter neighbourhood for industrialists a few decades later.

This mainly residential and commercial district remains uptown Barcelona both geographically and in terms of socio-economic status and is home to some great clubs and restaurants.

As far as tourism is concerned, the main attraction of the District of Sarrià-Sant Gervasi is the mountain of Tibidabo on the Collserola Ridge, which offers spectacular views of Barcelona and is home to a much-loved funfair.

The district comprises the village of Sarrià, the more or less urban neighbourhoods of Sant Gervasi-Galvany, El Putget i Farró, Sant Gervasi-la Bonanova and Les Tres Torres, and Vallvidrera, Tibidabo i les Planes up on the Collserola hills.

Gràcia was another town that became a district of Barcelona at the end of the 19th century and it still retains a very distinct charm.

The area is linked to Barcelona City Centre by the eponymously named Passeig de Gràcia is the Vila de Gràcia.

The neighbourhood is full of lovely squares and has a very arty feel, whilst the top of the district is very hilly and of little interest to the average tourist.

The obvious exception to this is modernista architect Antoni Gaudí’s magnificent Park Güell up on the edge of the Collserola hills, which is a magnet for tourists.

Although the village of Horta is one of my favourite parts of Barcelona, there’s very little in the district that would be on the tourist agenda.

The main exceptions are the magnificent modernista Hospital de Sant Pau by Gaudí’s contemporary Lluís Domènich i Montaner and the Laberint d’Horta, an 18th century maze and gardens and one of Barcelona’s off the beaten track jewels.

Perhaps you should also make a note of the address of the Hospital del Vall d’Hebron, which is Barcelona’s main hospital,  just in case you become ill during your stay.

Nou Barris is a jumble of neighbourhoods, which despite having no single coherent identity, has a lot of interesting places if you know your way around.

As far as tourism is concerned the Nou Barris has few obvious attractions and.the fact that a district so large only has four hotels gives you an idea of just how far off the tourist map it is.

It was originally part of the old municipality of Sant Andreu de Palomar but was cut off from the historic centre when Avinguda Meridiana became the northern motorway exit to Barcelona in the 1970s.

I actually spend quite a lot of time around Virrei Amat and Vilapicina, and although there are some great bars and restaurants, it’s not at all touristic.

Centred on the lovely old town of Sant Andreu del Palomar, where I lived 20 years and where all my closest friends still are.

Sant Andreu is a really great part of Barcelona, but there’s nothing in particular to see, apart from our historic third division football club UE Sant Andreu and La Maquinista Shopping Centre.

When it finally opens, the district will be home to Barcelona’s new main train station at La Sagrera, so in a few years time it will be a likely stopping off place to visitors to the city.

Sant Martí was one of the districts of Barcelona that benefitted most from the urbanisation projects for the 1992 Olympics.

The whole seafront was cleaned up and modernised so you’re very likely to pay a visit to the Barcelona Beaches of Bogatell and Mar Bella, Port Olímpic or the lovely old barri of Poble Nou.

Another point of interest is the Parc del Fòrum, which houses Barcelona’s International Conference Centre and is the scene for major music festivals, such as Primavera Sound.

The area close to Plaça del Glòries, which is currently being redeveloped, is the Barcelona Technology and Innovation District, 22@.

Although not technically Districts of Barcelona, the suburbs of Santa Coloma de Gramenet and Sant Adrià de Besós form part of the comarca or county of El Barcelonès, which is basically Greater Barcelona.

These separate municipalities form part of the metro system and you don’t really notice any difference as you cross into them from the Sant Andreu and Sant Martí districts of Barcelona.

The other two municipalities in the Barcelonès comarca, L’Hospitalet de Llobregat and Badalona, are definitely part of Greater Barcelona but also have their own separate identity.

If you are a tourist, the residential parts of these towns are unlikely to grab your attention.

However, Sant Adrià and Badalona both have beaches and coastline and Hospitalet is beginning to compete with the Fira de Barcelona at Montjuïc as a conference organiser so if you are here on business you may well pay a visit.