From the City Centre to the Seafront 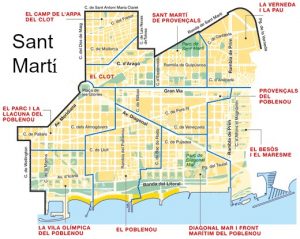 Sant Martí make up Barcelona District X and can be loosely divided into two major sections with Gran Via as the border and each of these can be further subdivided into smaller zones.

The four neighbourhoods above Gran Via, Sant Martí de Provençals comprises the historic centre of the municipality of the same name along with La Verneda i La Pau.

Also part of the old town, El Clot and Camp de l’Arpa form an old nucleus which, although cut across by the main roads of La Meridiana and Carrer Aragó, still remain linked.

The remaining six neighbourhoods on the other side of Gran Via can loosely be referred to as El Poblenou and comprise the part of Barcelona that benefitted most the 1992 Barcelona Olympics.

The once rundown industrial areas of La Vila Olímpica de Poblenou, El Poblenou itself, Diagonal Mar i El Front Marítim del Poblenou and El Besòs i El Maresme were an example of Barcelona having its back to the sea.

They were completely modernised for the Olympics and now boast some of the best city beaches on the Mediterranean whilst retaining a vibrant centre in keeping with the industrial tradition.

Running along either side of the lovely Rambla de Poblenou, El Poblenou itself retains its community focus and is one of the nicest neighbourhoods outside Barcelona city centre.

This is the centre of the old industrial area that became known as the Manchester of the Mediterranean in the 19th century and a couple of well-preserved factories remain and the local cemetery is a surprising attraction.

Its full of great bars and restaurants and the fact that it backs in to Bogatell Beach means that Poblenou should definitely be at the top of your Barcelona off the beaten track places to visit.

Originally built to house the athletes during the 1992 Olympics, the Vila Olímpica is now a pleasant neighbourhood in its own right.

Despite being a little too modern for my liking, its location between the Parc de la Ciutadella and El Poblenou means you have easy access to both greenery and a more vibrant neighbourhood life.

Similarly, the presence of the Olympic Port and the Nova Icària Beach make the neighbourhood an excellent place both to live and to visit.

The Parc de Diagonal Mar is particularly pleasant and has quickly become home to surprising array of wild birdlife.

Along the Front Marítim, Platja de Mar Bella is well-known as the city’s main gay and nudist beach and further along Nova Mar Bella is ideal for families and possibly the quietest beach in town.

Located on the border between Barcelona and Sant Adrià, until recently El Besòs i El Maresme was quite a rundown area and in fact, the local Civic Centre still has a great reputation on the Barcelona flamenco scene, which has always been so lively because of immigration from the rest of Spain.

However, the Fòrum de les Cultures in 2004 brought about a complete renovation of the neighbourhood with the building of the Parc del Fòrum and other improvements.

The Platja del LLevant beach and the Zona Banys Fòrum are great for swimming and sunbathing and there are plans to locate Barcelona’s Maritime Zoo here.

Fanning out in a triangle from Plaça de les Glòries between Gran Via and La Meridiana, El Parc i La Llacuna del Poblenou is already home to the iconic phallic Torre Agbar skyscraper as well as the Glòries Shopping Centre.

The neighbourhood is due to undergo further transformation owing to the redevelopment of Plaça de les Glòries and the arrival of more projects associated with the 22@ innovation and technology area.

Although it is home to the pleasant Parc del Centre del Poblenou, Provençals del Poblenou is the most difficult to define of the Poblenou neighbourhoods.

It is mainly residential and I certainly tend to go through on my way to somewhere down to the centre of Poblenou and Bogatell Beach.

Hopefully, new 22@ projects will bring some dynamism to the neighbourhood.

Unless you had been told, you probably wouldn’t know that this is the historic centre of the old municipality and one of the most important towns on the Barcelona plain.

Hit very badly by unplanned urban development in the 1950s, there is little left of the rural area immortalised by so many great Catalan painters.

A few old masias remain and the medieval church and rectory are still in surprisingly good condition.

Another victim of unplanned urbanisation in the 1950s, La Verneda i La Pau has a lot in common with neighbouring Sant Martí de Provençals.

Fanning out like a pizza slice from Plaça de les Glòries towards the city centre, El Clot is wedged between Gran Via and La Meridiana and cut in two by the busy Carrer Aragó.

It is best known for the railway and metro station but this old industrial neighbourhood is centred on its lovely 19th century market.

You can still visit its industrial past at La Farinera and the Parc del Clot is one of my favourite inner city parks.

Separated from neighbouring El Clot by La Meridiana, Camp de l’Arpa is a little known treasure of a Barcelona neighbourhood.

A large part of it escaped Cerdà’s blocked plan for the Eixample so it still has some lovely old two storey houses set on quiet passageways.

These along with Plaça de Can Robacols and the pedestrianised Carrer Rogent provide the main focus for neighbourhood life and give it a slightly village atmosphere.