Although there are many dishes that can be considered typical Catalan Christmas food and drink, the traditional Christmas day meal consists of Escudella amb Carn d’Olla accompanied by red wine and locally-produced cava.

The Catalan Christmas dessert is normally cylindrical neules dipped in cava and torrons with a moscatell sweet wine.

On Boxing Day, which is also celebrated at home with the family, Catalans normally have canelons.

My explanation below is very much based on my own experiences of celebrating ‘Nadal’ with friends and family.

If you are in Barcelona or Catalonia on holiday, you may find it much more difficult to enjoy traditional Catalan Christmas food in a restaurant or hotel, where the fare is much more international and tends to be more similar to the picture below. 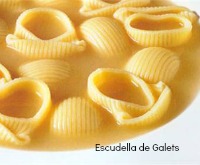 Escudella and Carn d’Olla is the typical Christmas meal in Catalonia and is actually two dishes in one.

Escudella or Sopa de Galets is a strong clear soup containing large snail-shaped pasta, which is made from the stock produced by boiling the Carn d’Olla – literally, the meat of the pot.

As is often the way with traditional foods Escudella amb Carn d’Olla has a long history and records show that it was eaten as far back as the 14th century, making it the oldest documented soup or stew in Europe.

It certainly isn’t exquisite food typical of the Mediterranean diet but rather tasty nourishing poor man’s food that Catalans eat throughout the whole winter.

The Carn d’Olla is generally a mixture of meats including botifarra blanca and negra, beef, pork, lamb and chicken and most important of all, la pilota – a massive meatball made of sausage meat.

All this is cooked up along with potatoes, cabbage and chick peas and the resulting stock is poured off to make the Escudella or Sopa de Galets.

Galets – very large snail-shaped pieces of chewy pasta, which as far as I know are unique to Catalonia – are added to the stock and the resulting soup makes for a very tasty and filling starter.

Meanwhile, the Carn d’Olla sits on the stove waiting to be placed on a large oval dish as soon as everyone has finished the Escudella.

The star turn of the Carn d’Olla is always the meatball – la pilota – which has be big enough for everyone to get a piece otherwise family infighting, a Christmas tradition typical in Catalonia and worldwide, will start too early.

All of this is accompanied by generous quanities of Catalan red wine or cava.

I generally have seconds or even thirds of both the food and drink, by the way!

As a break after the heavy main course and an excuse for having another glass of cava, the Neules are served.

A Neula is a crunchy biscuit-like pastry cylinder, which is perfect for dipping in cava.

Apparently, they were a favourite of Jaume I, which makes them 13th century at least, and were invented by a nun, who got waylaid while making sacramental bread.

Next come the Torrons, which date from Arab times and were recorded as far back as the 16th century.

The traditional Torró is in the form of a sticky tablet made of almonds, honey and eggs but these days, you get them in many different flavours.

The Torrons are generally served with Moscatell, a very sweet wine.

So much sugar is too much for me so I generally move on to the coffee (laced with brandy, I must admit).

On Boxing Day or Sant Esteve, all the desserts and drinks remain the same but the really typical Catalan Christmas food is Canelons.

Canelons are the Catalan version of Canneloni and were introduced by Italian chefs who served the Catalan upper-classes in the 19th century.

Their popularity soon spread and they begin to take on a distinctly Catalan flavour.

The pasta is allowed to get much softer than the Italian version and the sauce is bechamel rather than cheese sauce.

The filling is made of ground meat that has previously been cooked rather than mince or sausage meat and tomato is never added.

Although Canelons are eaten all year round, this makes them perfect for Boxing Day as the Carn d’Olla from the previous day can be ground up and used as a filling.

If you think there’s been an oversight or you can provide more more detail about a particular event, I’d be delighted to hear from you.

Please complete the form below. You can also upload photos and images, by the way.