Why You Shouldn’t Ask a Catalan to Celebrate Halloween! 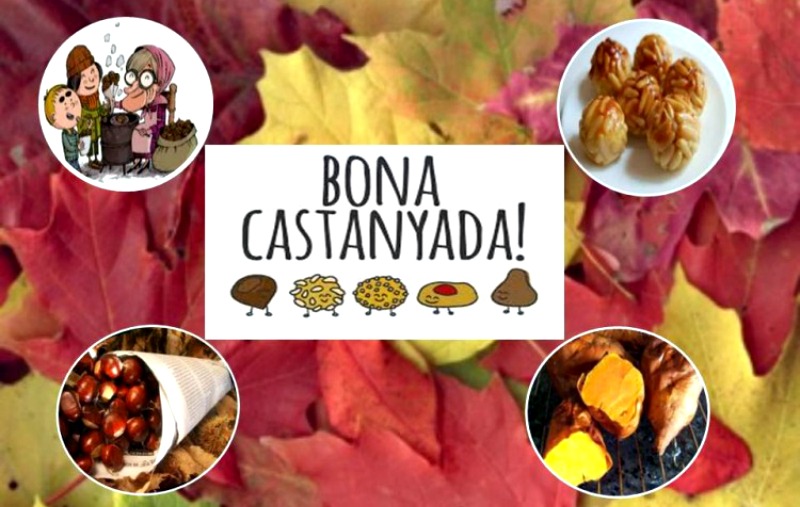 La Castanyada is a Catalan festival originally celebrated on Tots Sants or All Saints’ Day on November 1st but in recent years more usually on the evening of October 31st so it now has to compete with the increasingly popular Halloween.

Like Halloween, el Magosto which is celebrated in Asturias, León and Galicia or Samhain, the Celtic New Year, La Castanyada is an autumn festival that has its roots in an ancient funeral ritual.

The origins of La Castanyada go back to the late 18th century and derive from funeral meals, when vegetables, nuts and small bread rolls known as panallets were served.

The meal was a symbolic communion with the souls of the dead and while the chestnuts were being roasted, the Rosary prayer was intoned in memory of members of the family who had passed away.

Today the central event is a meal consisting of roast chestnuts, marzipan cakes known as panallets, sweet potatoes and candied fruit and the traditional drink for La Castanyada is Catalan moscatell sweet wine.

In the days leading up to La Castanyada, on the streets of Catalonia, you can come across castanyeras or chestnut vendors selling hot roast chestnuts, which generally come wrapped in newspaper.

Traditionally, La Castanyera was an old woman dressed in threadbare but warm clothes, who is generally pictured standing in front of her roasting chestnuts wearing a scarf on her head and a hemp and wool apron but today both women and men are likely to be chestnut vendors.

I think La Castanyada is a really great festival and at home we do as much as possible to celebrate it as traditionally possible, with all the typical food and even going as far as putting on improvised performances of Don Juan Tenorio, the play by José Zorilla which, for some reason, has become part of the castanyada tradition.

In recent years, however, probably mainly due to the influence of American television and films, a depressingly commercial version of Halloween has become increasingly popular.

People dress up as ghosts, discoteques and restaurants put on Halloween parties and theme parks like Port Aventura have a field day organising special events but to be perfectly honest, in comparison with the local traditions of La Castanyada, Halloween is a foreign and superficial excuse for making a quick buck.

You can celebrate Halloween anywhere but La Castanyada is quintessentially Catalan so if I were you, I’d stock up with chestnuts, sweet potatoes, panallets and moscatell wine and enjoy La Castanyada in the traditional Catalan way.

Thanks to Escola Sant Francesc d’Assis de Barcelona for the Bona Castanyada image above.

If you think there’s been an oversight or you can provide more historical detail about a particular event, I’d be delighted to hear from you.

Please complete the form below. You can also upload photos and images, by the way.