Firmly centred on its capital Igualada, the Anoia comarca is divided between industry and agriculture, and to be perfectly honest, it is probably not an obvious choice for the casual visitor or tourist.

However, if you’re driving around this part of Catalonia you’ll find some very pleasant little villages and planty of nice places to eat.

With a total of 33 municipalities and a population of under 120,000, some of the villages are extremely tiny and the capital Igualada only has 39,000 inhabitants.

The comarca is mainly agricultural with some industry around the larger towns.

Despite having little in terms of great monuments, L’Anoia is a lovely laidback comarca and it’s well worth hiring a car and exploring the green countryside and the neighbouring wine region of L’Alt Penedès.

The main place of interest is El Bruc, which was where the legend of the Drummer Boy of Bruc hails, and is also conveniently close to Montserrat, making it an excellent stop of point if you’re coming from the south.

If you are staying in Barcelona and want to visit the sacred mountain, you’ll find an excellent choice of day trips and tours to the mountain and monastery of Montserrat.

* The Hotel Search Box is pre-configured to give results in the Igualada area. If you’re looking for Accommodation in El Bruc or any other town in the area, please insert the name of the town in the Where? box. 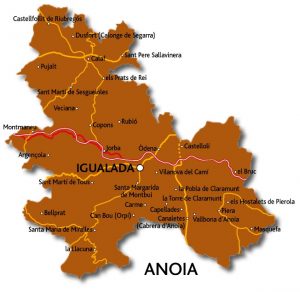 Located directly inland from the city of Barcelona, L’Anoia is bordered by the comarcas of Solsonès in Lleida Province and Bages to the north with Baix Llobregat to the west, both of which are in Barcelona Province.

To the south and east, we find Baix Penedès and Alt Camp, and to the east Conca de Barberà and Segarra and the rest of Tarragona Province.

The Anoia comarca itself is divided into three geographical zones – the Conca d’Òdena, in the centre, the Alta Anoia and the Pla de Montserrat

Outside these areas we find El Bruc that is situated past the Port de Bruc and La Llacuna between Montserrat and the Pla de Montserrat.

In fact, the majority of times I’ve been through L’Anoia have been on my way to or from Montserrat and we’ve often stopped for something to eat in one of the villages.

However, I have friends Igualada and have heard that the old town is quite pleasant, so the capital of the comarca is on my busket list of places to visit this spring.

The Drummer Boy of Bruc

The Drummer Boy of Bruc

L’Anoia’s most celebrated legend goes back to 1808 when the Catalan were fighting the French in the area and is known as the Timbaler or Drummer Boy of Bruc.

Legend has it that the Catalan troops were besieged by the French forces in the hills around Bruc when the Drummer Boy began to play.

The sound echoed off the Montserrat mountains and the French thought that they were facing a multitudinous Catalan army rather than a few stragglers and retreated.

The Catalans won the battle and the rest is history and it’s for this reason that you’ll find streets named after Bruc all over Catalonia..

As I mentioned above, the village of El Bruc doesn’t really form part of the three geographical zones bordering the Anoia River and really is part of the Montserrat range.

The village itself, with a population of 1,500, is small but it makes a good stopping of point, particularly if you’re on your way to Montserrat, where you can get something to eat or drink and visit some of the sights associated with the legend of the Drummer Boy of Bruc.

If you understand some Catalan, you can find up to date news about L’Anoia on the Consell Comarcal de L’Anoia Website.