The Cradle of Catalan Culture

Located in Central Catalonia, Osona is one of the largest comarques in Barcelona Province and one of the most interesting areas within easy reach of Barcelona.

Green, fertile and famous for its excellent embotits and other pork products, it’s also considered one of the cradles of Catalan culture.

With a population of over 38,000 inhabitants, the historic comarca capital of Vic, with its fine cathedral, episcopal museum and university, clearly dominates the region.

With populations of 20,000 and 13,000 inhabitants respectively, Manlleu and Torelló are the other major towns in the comarca.

Located right in the heart of Catalonia and a short drive by car or ride on the Rodalies local train system from Barcelona, the whole of the Osona comarca is a fine place to visit.

With its lush green rolling hills, it’s one of the most attractive comarques in Barcelona Province and it’s historical importance goes back to the roots of Catalan history.

Trains are frequent to Vic and some of the other larger towns but by far the best way to explore Osona is to hire car  and set off into the hills.

* The Hotel Search Box is pre-configured to give results in the Vic area because it is both the capital and located in the centre of the comarca. If you’re looking for Accommodation in Manlleu, Torelló or any other town in Osona, please insert the name of the town in the Where? box. 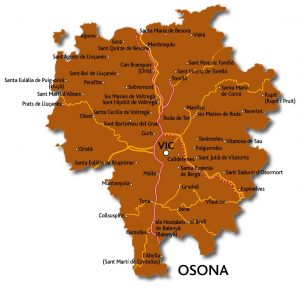 Abbot Oliba Statue in Vic
Save

Back in the fourth century BC, what is now the city of Vic was called Ausa and was the capital of the Celt-iberian Ausetan tribe.

The town was important under the Romans and later became a Visigoth capital and the name Ausa gradually evolved into the modern-day Osona.

However, it wasn’t until the ninth century, during the time of the first Catalan King, Guifré el Pilòs, generally prosaically translated into English as Wilfred the Hairy, that Vic came to occupy its role, along with Ripoll, as one of the cradles of Catalan culture.

When the Catalans came down from their mountain hideouts following the Moorish occupation to occupy the agricultural lands in Central Catalonia, Wilfred the Hairy made the town one of his capitals.

Vic’s importance in the making of the embrionic Catalan nation can be seen in its magnificent Romanesc Cathedral built in 1038 by Abbot Oliba, another of the key figures in early Catalan history.

The accompanying photo shows the modern statue of Abbot Oliba outside the brilliant Museu Espiscopal in Vic, which after the MNAC museum in Barcelona probably contains the best collection of Romanesque and early Gothic Art in Europe..

A Land of Contrasts

I have to say that Osona is one of my favourite comarques partly because of the variety of its scenery.

I particularly like the area known as Paisatges del Ter, which includes El Bisaura, and is located in the foothills of the Pyrenees along the banks of the meandering River Ter.

This is rolling green countryside reminiscent at times of parts of the north of England.

The Potes de Montseny region is also mountainous but somehow much more Mediterranean with steeper climbs.

The Sau Valley and Collsacabra is centred on the Sau Reservoir whilst El Lluçanès rolls down to the River Llobregat.

The photo, taken of Sant Quirze de Besora from Casa Nova del Castell, sums up my overall impression of much the comarca, which funnily enough often reminds me of my home in North Nottinghamshire.

If you understand some Catalan, you can find up to date news about Osona on the Consell Comarcal d’Osona Website.