El Vallès Occidental is a large and densely-populated comarca that meets Barcelona on the other side of the Collserola Ridge at Sant Cugat, Cerdanyola and Montcada i Reixac.

Clearly dominated by its twin capitals of Sabadell and Terrassa, the comarca comprises a total of 23 municipalities.

What’s surprising about El Vallès is that despite the concentration of industry, there are many areas where the comarca does justice to its name – the valleys.

In fact, if you venture beyond Sabadell and Terrassa, you’ll find yourself surrounded by extraordinary countryside and beautiful views.

El Vallès Occidental is definitely an area worth exploring and given that it is so close to Barcelona many towns have excellent public transport connections, either by train, bus or Ferrocarrils de la Generalitat, which is popularly known as the ‘Metro del Vallès’!

However, if you really want to get further out into the countrside the best idea is to hire a car and explore the little towns and villages.

* The Hotel Search Box is pre-configured to give results in the Terrassa area. If you’re looking for Accommodation in Sabadell, Cerdanyola or any other town in El Vallès Occidental, please insert the name of the town in the Where? box. 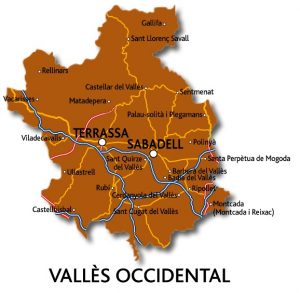 Whilst the Collserola Ridge provides a natural break between the comarcas of El Barcelonès and El Vallès Occidental, the towns on the other side of the hill are so close that they almost feel like part of Barcelona.

With a population of 86,000, Sant Cugat del Vallès is an extremely desirable place to live and is almost a suburb of Barcelona.

Sant Cugat is well-worth visiting for its tenth century Benedictine monastery, which is one of the best examples of the transition from Romanesque to Gothic with large sections in both styles.

Cerdanyola del Vallès and Bellaterra are of particular importance as they are the location of the Universitat Autònoma de Barcelona (UAB), which is one of the largest and most important universities in Spain.

Other important towns are sleepy little Montcada i Reixac, which nestles amongst the hills behind Barcelona and Rubí, but neither are of much interest to tourists..

The whole of the area is very easily accessible from Barcelona either by using Barcelona local trains or the Ferreocarrils de la Generalitat, which are sometimes know by the locals as El metro del Vallès.

Escola Industrial in Terrassa
Save

The central section of El Vallès Occidental comprising Sabadell and Terrassa and their satellite towns was the point of arrival for a lot of Spanish immigrants in the 1950s and 1960s, who came to Catalonia in search of work.

Textile manufacturing and associated industries in Terrassa and Sabadell had been one of Catalonia’s industrial motors since the 19th century so it was an obvious destination.

In fact, if you look up the town of Badia del Vallès in Google Earth, you can still see that its Spanish named street were laid out to form the shape of Spain and the regimes joke was that it had planted a mini-Spain in the heart of Catalonia.

The ploy seemed to work initially but sadly for the Castilian Right, the children of these immigrants have become Catalans despite their surnames.

The mass immigration led to a population explosion and the construction of some pretty ugly suburbs and satellite towns.

However, the Sabadell-Terrassa area is still an industrial motor and both with populations of over 200,000 inhabitants remain two of Catalonia’s most important towns.

Given this industrial tradition, if you search behind the modern jerry-built facade, you’ll find some amazing Modernista factory buildings and both towns are home to excellent museums.

El Vallès Occidental is also home to some of Catalonia’s most prestigious jazz and blues festivals, with the Terrassa Jazz Festival taking place every March.