History and Tradition in Central Catalonia

El Bages comarca is one of the largest in Catalonia and is located right at the heart of the Principlality, and incorporates the sub-comarcas of El Moianès and part of El Lluçanès..

The comarca is clearly dominated by its historic capital Manresa, which is not only one of the most important towns in Central Catalonia but also where Ignatius of Loyola founded the Jesuits.

Other towns of importance include the magnificent fortified town Cardona, which is one of my favourite towns in central Catalonia and with its Parador Hotel is a lovely place to stay.

Tourists, though, are likely to spend time in Monistrol de Montserrat on their way to the sacred mountain and monastery.

Speaking personally, I’m a great admirer of El Bages and the rest of Central Catalonia,  and I strongly recommend booking a hotel in Manresa or Cardona, hiring a car and exploring the countryside and historic monuments of the region.

If you are staying in Barcelona and want to visit the sacred mountain of Montserrat, you’ll find an excellent choice of day trips and tours to the mountain and monastery of Montserrat.

* The Hotel Search Box is pre-configured to give results in the Manresa area. If you’re looking for Accommodation in Cardona, Monistirol or any other town in the area, please insert the name of the town in the Where? box. 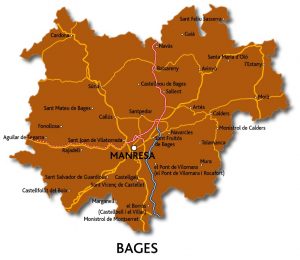 The Bages is a territory great contrasts due in part to its diverse natural, historic and architectural patrimony.

The prehistoric caves at Toll are well-worth a visit, but the comarca really came into its own during the Romanesc and Gothic periods.

The Bages is one of the key comarques of Catalunya Vell – Old Catalunya – and these defensive outposts date back to a time when the territory was continually under attack from the Moors.

So the comarca is littered with castles and defensive outposts, and the castle and fortified town of Cardona, in particular, should not be missed.

The capital Manresa, in particular, has always played a key role in the history of Central Catalonia.

This is reflected in its fine medieval old town with its bridges over the River Cardener and Gothic cathedral.

The Bages comarca also has an important mining tradition, and the salt mountains at Súria, Sallent and the aforementioned Cardona make a fascinating day out.

Although Montserrat is the comarca’s most famous monastery, you definitely shouldn’t miss the Monastery of Sant Benet de Bages, located in the town of Sant Frutos de Bages (pictured below).

Sant Fruitós de Bages from a distance
Save

Located right in the heart of Central Catalonia, El Bages borders on the comarcas of Baix Llobregat, Vallès Occidental, Vallès Oriental, Anoia, Osona and Berguedà in Barcelona Province and by Solsonés in the Province of Lleida.

Despite its industrial tradition, the over-riding impression you get of the Bages is of greenery, which in part is due to the fact that the comarca is cut across by two of Catalonia’s major rivers, El Cardener and El Llobregat.

Around 70% of the comarca is woodland and the main crops are cereals and vines – D.O. Pla de Bages is a very decent wine, by the way.

It’s this combination of history and nature along with excellent food that makes the Bages such a great place to visit and as I mentioned above I really recommend spending some time here sp staying in one of the larger towns and hiring a car is an excellent option.

If you understand some Catalan, you can find up to date news about El Bages on the Consell Comarcal del Bages Website.