In Search of a Barcelona Identity 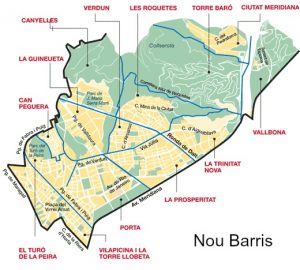 As the name in Catalan would suggest, Nou Barris, which is Barcelona District VIII, originally consisted of Nine Neighbourhoods but following the administrative reshuffle of the 1980s, there are now thirteen.

The district suffers from an identity problem due to its lack of a historic centre and the truth is that Nou Barris grew up as a loose collection of barris and was cobbled together for administrative reasons rather than because it has an inherent sense of identity.

Most of the district was originally part of the old municipality of Sant Andreu del Palomar and if it hadn’t been for the building of the railway lines out of Sant Andreu and later the inauguration of Avinguda Meridiana – the main road north – Nou Barris wouldn’t exist as a separate entity.

In fact, the nicest part of Nou Barris is just across the Meridiana from Sant Andreu and comprises Porta, Vilapicina i Torre Llobet, Turó de la Peira, Can Peguera and La Guineueta.

This area with its lovely parks and pleasant shopping is the oldest part of the district and La Guineueta is the administrative centre whilst to an outsider at least Plaça Virrei Amat offers a natural hub.

The neighbourhoods above the Ronda de Dalt ring road – Canyelles, Les Roquetes and La Trinitat Nova along with La Prosperitat and Verdun – were jerry-built to absorb the massive Spanish immigration in the 1950s and 60s and, although much improved, are probably the ugliest and most poorly equipped parts of Barcelona.

The urbanised parts of Torre Baró and Vallbona tells the same story but these neighbourhoods are mainly rural while Ciutat Meridiana seems to suffer the worst of  both worlds as it was not only poorly planned and equipped but is also isolated from the rest of Barcelona.

Plaça Virrei Amat at Night
Save

Porta stretches up the hill to the right of Passeig Fabra i Puig on the other side of La Meridiana from Sant Andreu.

With great shopping on Fabra i Puig and Pi i Molist and lovely squares such as Plaça Soller it is possibly the nicest part of Nou Barris.

Other reasons to visit are the excellent sports facilities, open air swimming pool and park at Can Dragó as well as the Heron City shopping centre and the new El Corte Inglés department store.

Vilapicina i La Torre Llobeta is a long thin neighbourhood that runs up to the left of Passeig Fabra i Puig all the way up to the border between Nou Barris and Horta-Guinardó.

Plaça Virrei Amat, one of the main hubs of Nou Barris, is within its borders, as are Carrer Escocia and Passeig Maragall.

La Torre Llobeta itself is a 15th century farmhouse that still stands anachronistically in the middle of a housing estate.

Turó de la Peira is built around the foot of a hill and park of the same name.

The housing is pretty substandard but the proximity of the park and its proximity to Plaça Virrei Amat makes it a pleasant location.

Turó de la Peira is also home to the Mercat de la Mercè, the public market for this part of Nou Barris.

Can Peguera Neighbourhood Map
Save

Can Peguera is one of the two Cases Barates, literally cheap housing, estates left in Barcelona.

It was built at the end of the 1930s to house Spanish immigrant workers who had come to Barcelona to work on the construction of the metro.

The tiny single storey houses are painted white and have a quaint rustic feel about them.

La Guineueta is some distance from Virrei Amat but as it provides a natural link for the neighbourhoods on the other side of Ronda de Dalt, it is not surprising that it is Nou Barris’ administrative centre.

The council offices and main library are set in the lovely Parc Central de Nou Barris and, although much of the area consists of uninspiring modern buildings, this park and the Parc de la Guineueta itself make it a pleasant place to live.

Separated from La Guineueta by the park, there really isn’t much you can say about Verdun.

The housing was built in the 1950s with very little concern for planning or facilities in order to cram new arrivals to Barcelona into as small a space as possible.

Blocks of flats have been demolished and rebuilt and some spaces have been created but Verdun still seems cramped and ugly to me at least.

La Prosperitat suffers from many of the same problems but for some reason seems a lot more optimistic to me.

It is mainly Spanish-speaking but the locals formed neighbours associations to fight for improvements both under Franco and the democracy and that spunky sense of community has remained.

It is no surprise that streets and squares are named after celebrated left-wing Spaniards.

Also bordering La Meridiana but this time on the other side of Ronda de Dalt, Trinitat Nova is pretty depressing.

These ugly grey blocks of flats were built in the 1950s and suffered from aluminosis by the 1970s.

Much of the neighbourhood has been rebuilt and it now has a metro station.

Most of Les Roquetes was built by the Spanish immigrants themselves when they arrived in the 1950s and so was one of the barraques or shanty towns in the hills surrounding Barcelona.

New blocks of flats were built and the basic services finally arrived but neighbourhoods such as this were left with an admirable sense of community.

Furthermore, with the Collserola hills so close the setting is also sometimes quite beautiful.

Canyelles is also set up in the Collserola hills so offers lovely views.

It wasn’t built until 1974 and was the last major housing project promoted under the dictatorship but even so suffered from poor planning and lack of facilities.

I have to admit the park is very nice and the arrival of the metro in the 1990s improved conditions significantly.

Torre Baró is the first of the Zona Nord neighbourhoods, which are treated separately from the rest of Nou Barris as they are so far out on the hills.

There are only a couple of thousand people living in Torre Baró, mostly in dwellings they built themselves in the 50s and 60s, so the area is short on facilities but has a pleasant rural feel to it.

What everyone thinks is the Torre Baró – the Baron’s Tower – up on the hill is actually a hotel that was started in the first decade of the 20th century but never finished.

Vallbona is if anything even more rural with a population of less than 1,500.

Cut off from the rest of Barcelona by a tangle of motorways, large parts of Vallbona are still farmlands, where you can by fresh seasonal vegetables direct from the farm shop.

The territory is crossed by the Sèquia Comtal, the only remaining section of a 10th century man-made water course.

Built on the outer limits of Barcelona on land that was considered too damp for a cemetery, Ciutat Meridiana is a testament to administrative abuse and speculation under the Franco regime.

It has, however, become the centre of Nou Barris Zona Nord in its own right and the locals continue to demand improvements.

The fact that an increasing number of youngsters get on and off the train to the Universitat Autònoma de Barcelona here can only be seen in positive terms.