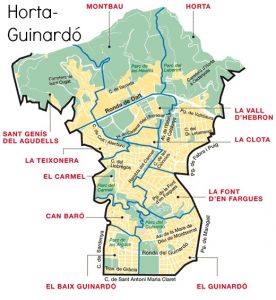 Horta-Guinardó, which is Barcelona District VII, starts relatively close to Barcelona City Centre and stretches right up into the Collserola hills.

It is one of the greenest districts in Barcelona and even the city centre neighbourhoods are home to large parks.

The District of Horta-Guinardó comprises a total of eleven neighbourhoods, which can be roughly grouped into four zones.

El Baix Guinardó and El Guinardó are closest to the city centre and were once the highest point of the old municipality of Sant Martí dels Provençals.

Despite absorbing quite a lot Spanish immigration in the 1950s and 1960s, the two neighbourhoods have managed to retain their identity.

This is not the case with El Carmel, Can Baró and La Teixonera, which were underdeveloped prior to the influx and became shanty towns for a couple of decades.

These neighbourhoods have been improved recently and have developed a strong sense of community but still have a slightly scruffy disordered feel about them.

My favourite part of Horta-Guinardó is made up of Horta, La Font d’en Fargues, La Clota and La Vall d’Hebron and is centred on the old village of Horta.

There are narrow streets and pleasant squares here and the area has a wonderfully laid back feel to it.

Finally, we come to the neighbourhoods above the Ronda de Dalt ring road, which include the top section of Horta itself along with Montbau and Sant Genís dels Agudells.

The urbanised areas retain similarities with their counterparts on the other side of the Ronda de Dalt but these are really mountain barris and the gateway to the Collserola natural park.

Designed on a grid system similar to the Eixample, El Baix Guinardó shares a lot of similarities with both neighbouring Sagrada Familia and Gràcia.

The development of the neighbourhood goes hand in hand with the installation of water towers here by Aguas de Barcelona – the Barcelona Water Company – in the late 19th century.

The area that once provided water for the whole city of Barcelona is now the lovely Parc de les Aigües and the fine mudéjar Casa de les Altures, the former home of the Water Company president, is now home to the Ajuntament of Horta-Guinardó.

Separated from El Baix Guinardó by the Parc del Guinardó, El Guinardó itself absorbed quite a lot of Spanish immigration in the 1950s and 1960s.

However, given the neighbourhood already had a strong sense of identity, it has managed to retain a pleasant residential feel.

The main reason for visiting El Guinardó, though, is to feast your eyes on the magnificent Hospital de Sant Pau.

The hospital was built by Lluís Domènech i Montaner between 1905 and 1930 and in the hearts of Barcelonans rivals the Sagrada Familia as the city’s greatest Modernista monument.

Metal Escalators in El Carmel
Save

El Carmel is the centre of the area most hit by the influx of Spanish immigrants in the 1950s and 1960s and the development that took place was completely unplanned.

It started life as a combination of shacks and shanty towns and the problem was exacerbated by cheap high-rise blocks built by speculators in the 1970s.

Local facilities have been built in the last decade or so but the neighbourhood’s precarity came to light in 2005 when an area of El Carmel collapsed into the tunnels being built for the new metro station.

On a slightly more positive note, you’ll find some great bars with a particularly good line in chocos and chorizillos and other Andalusian tapas.

The tiny La Teixonera neighbourhood has a lot in common with El Carmel.

They both received an influx of unplanned immigration and both areas are very hilly, which makes getting about quite difficult particularly for the elderly and disabled.

Metal escalators have been installed in recent years and the arrival of a metro station which La Teixonera shares with neighbouring El Coll in Gràcia has made life in this slightly forgotten neighbourhood a little easier.

Can Baró Neighbourhood Map
Save

Nestled on the Carmel side of the hill known as El Turó de la Rovira, Can Baró was also hit by mass Spanish immigration in the 1950s and 1960s and suffered the inevitable consequences.

Can Baró literally means House of the Baron and you can see the former home of the Baron de Sant Lluís lodged incongruously between scruffy blocks of flats.

The main reason for visiting, though, is an excellent Spanish Civil War museum on the site of anti-aircraft guns on the top of Turó de la Rovira.

Plaça Eivissa in Horta
Save

Horta is one of the largest neighbourhoods in the Horta-Guinardó District and is made of two parts.

The area closest to town is the lovely centre of what was once the village of Horta, which although it contains some modern buildings, retains a wonderfully laid back village atmosphere and is one of my favourite barris of Barcelona.

Further up the hill on the other side of Ronda de Dalt, you find the Velodrome, Can Cortada and the wonderful Parc del Laberint.

The park is home to 18th century gardens and maze and is possibly the best off the beaten track attraction in the whole of Barcelona.

La Font d’en Fargues was once the well to do part of Horta and I have to say it is as lovely as ever.

Located on the slopes of Turó de la Rovira, it became famous for a freshwater spring with medicinal properties and attracted bourgeois Barcelonans looking to escape the pollution of the city centre in the early 20th century.

There are still a few fine houses dating from this period but the neighbourhood is mainly single family detached houses set on quiet streets.

The third of the Horta neighbourhoods is tiny La Clota, which is located in a depression between El Carmel and Passeig del Vall d’Hebron.

It is one of the oldest parts of Horta-Guinardó and grew up around the meeting point of three streams.

It was here that the first laundries were established in the 19th century and was the place to where all rich Barcelona brought their washing.

Still the greenest part of what was once the Valley of Horta, the urbanised part of the Vall d’Hebron neighbourhood is a collection of high-rise blocks built firstly in the late 1960s and then added to just prior to the 1992 Barcelona Olympic Games.

There are a number of installations built for the Olympics including a swimming pool, tennis courts and rugby and football pitches as well as the Pavelló de la República, which commemorates the Spanish Civil War and contains a replica of Picasso’s Guernica.

There are also a number of fine old Catalan farmhouses, such as Can Travi Nou, Can Travi Vell and Casa Martí Codolar, dotted anachronistically around the neighbourhood.

The Laberint d’Horta Maze
Save

Just to the left of the green part of Horta and the Parc del Laberint on the Collserola side of Ronda de Dalt, Montbau is mainly mountainous countryside.

The part that hugs the main road is devoted to Psychology and Teacher Training Faculties of the University of Barcelona and the Vall d’Hebron hospital, currently Barcelona’s main hospital and one of the top research hospitals in Europe.

Behind these is a reasonably well-planned residential neighbourhood built in the 1950s.

Up in the hills, you’ll find the beautiful Parc de les Heures set around an equally lovely 19th century palace in the style of a French chateau.

Sant Genís dels Agudells was an ancient village dating from the 10th century and it really pains me that it suffered the honky-tonk unplanned building that came with the Spanish immigration in the 1950s and 1960s.

It is pretty ugly round here but if you look carefully you’ll find an old village centre consisting of a parish church, rectory and a few other buildings, which are now classified as of historical interest.

There is also a very old cemetery and most of the neighbourhood is taken up by the green Collserola hills.