From La Vila to The Hills above Park Güell 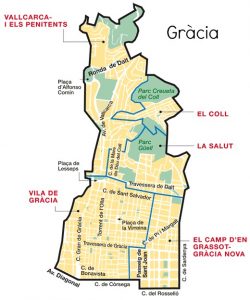 For a visitor, Gràcia is possibly the most satisfying of Barcelona’s peripheral districts, and given its concentration of bars, clubs and restaurants, one of the areas outside the city centre that you’re most likely to visit.

This long thin district begins at the top of the eponymous Passeig de Gràcia, which was built to link the City of Barcelona with the separate municipality of Gràcia and this old town is now known as La Vila de Gràcia.

The barri is traditionally home to arty and political types, but also supporting a very real local population which lends it an attractive, no-frills, small-town atmosphere.

Come here to eat and drink by all means, but also take time to stroll the streets and squares, and get the feel of a neighbourhood that, despite being so close to Barcelona City Centre, still feels lived in.

The district’s main tourist attraction is Antoni Gaudí’s Park Güell, which is set on a hill above the main centres.

Above the park the district stretches way up into the Collserola hills, making the Coll neighbourhood and the upper parts of Vallcarca i Els Penitents some of the hilliest parts of Barcelona.

La Vila is the historic centre of the town that was a separate from Barcelona throughout the 19th century and is what people are referring to when they talk in general about Gràcia.

With a reputation for arty bohemians and political activists, the Vila is the centre of a very vibrant community and it is no surprise that the Festa Major de Gràcia in August is one of the big dates on the Barcelona festival calendar.

However, it is the neighbourhood’s lovely squares, where you can sit out in summer, that draw me back time and again.

My favourites are Plaça de la Vila and Plaça del Sol but there are many more and you’ll find most lined with bar terraces, which are perfect for sitting out and taking in the ambience at any time of the day or night.

All in all Gràcia is possibly Barcelona’s coolest neighbourhood and a great alternative to the more central districts of Ciutat Vella or L’Eixample.

To the right of La Vila and just above the Sagrada Familia neighbourhood, Camp d’en Grassot is slightly more modern and doesn’t have as much atmosphere as the Vila but then, where does?

The part above Carrer Pi i Margall is actually the mini-barri of Ca l’Alegre de Dalt, which has an atmosphere all of its own.

Alegre de Dalt is where you’ll find the Nou Sardenya football stadium, home to the historic CE Europa, who were one of La Liga’s founding clubs in 1928 so football fans will definitely want to make a pilgrimage.

Immediately above Travessera de Dalt we come to the hilly La Salut neighbourhood, which you will definitely want to visit, as it is home to Antoni Gaudí’s magnificent Park Güell.

Like many of the neighbourhoods on the hills above Barcelona, La Salut began life as an area where rich Barcelonans had their summer residences and the original idea behind Park Güell was to build a select housing estate in the style of an English garden city.

The project failed commercially but artistically Gaudí managed to create one of his finest and most enigmatic works, in which he takes the combination of natural and man-made elements to its logical conclusion.

Running up the hill from Plaça de Lesseps, Vallcarca is a slightly featureless neighbourhood with two main streets, Avinguda de la República d’Argentina and Avinguda de Vallcarca, cutting through it.

Your main reason for visiting is because you’ll find the nearest metro stops to Park Güell here.

My tip is to get off at Vallcarca, visit the park and then catch the metro back to the city centre from Lesseps as this way you will be walking downhill all the way.

The Penitents neighbourhood is above Travessera de Dalt and you are quite far up into Collserola here, so it actually makes a good rendez vous point for walks up into the hills.

El Coll is quite possibly the steepest and hilliest neighbourhood in the whole of Barcelona.

Centred around a peak, or coll in Catalan, which is now the Parc de la Creueta del Coll, in medieval times the area was a hunting ground for the Barcelona nobility.

It then became infested with bandits until iron was found in the 19th century and in the 1950s and 1960s, the area grew as an unplanned shanty town for immigrants.

El Coll is now quite a pleasant neighbourhood that requires strong lungs and legs of its residents but, from a tourist’s point of view, I don’t think you will find many reasons for visiting.

If you live in the district and need to get any official paperwork done, such as the empadronament, the Oficina d’Atenció Ciutadana, or Citizens Help Centre, is at: