Uptown Barcelona Looking Down from the Hills 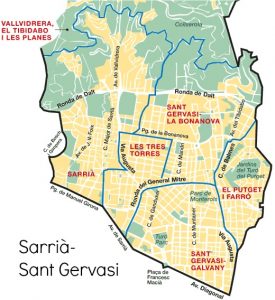 Sarrià-Sant Gervasi is Barcelona District V and the main point of entry to Barcelona’s lungs, the delightfully wild conservation area on the Collserola mountain ridge.

Sarrià-Sant Gervasi is Barcelona District V and the main point of entry to Barcelona’s lungs, the delightfully wild conservation area on the Collserola mountain ridge, which also marks the boundary between the city and Province of Barcelona.

Generally home to a better-off kind of Barcelonan, much of this area was first urbanised in the second half of the 19th century when bourgeois first built summer residences here.

The district is made up of six smaller neighbourhoods: Sant Gervasi-Galvany and Sant Gervasi-Bonanonova, El Putget i Farró, Tres Torres and the village of Sarrià, which dates back to medieval times, as well as the administrative neighbourhood of Vallvidrera, El Tibidabo i Les Planes.

This is definitely uptown Barcelona in both senses of the word as it’s not only at the top of the hill but also where the well-heeled ‘gent de bé’ have their expensive residences.

It is from Sarrià-Sant Gervasi that you look down on the rest of Barcelona, both geographically and financially.

Sant Gervasi-Galvany is the closest of the Sarrià-Sant Gervasi neighbourhoods to the centre of Barcelona and extends up the hill from Plaça de Francesc Macià and Avinguda Diagonal as far as Ronda del General Mitre.

There are some very select residences around the very pleasant Turó Park but the main centre of the neighbourhood is around the Mercat de Galvany between Carrer Amigó and Carrer Santaló.

Although mainly residential, this area also has a reputation as chic nightlife and has a good selection of restaurants, bars and clubs.

Carrer Muntaner and Via Augusta are not only the busiest streets in terms of traffic but also the neighbourhood’s commercial and business centres.

Trapped between Sant Gervasi and Gracià, this neighbourhood can be further divided into two areas, Farró below Ronda del General Mitre and El Putget above it.

I really like the network of narrow streets of that comprises the Farró neighbourhood.

They are almost impenetrable by car and the small houses often with gardens give the area quite a villagey feel.

El Putget is nestled around a small hill, El Turó del Putget, which has now been turned into a park.

Here the houses tend to be larger and there are still quite a few Modernista buildings, generally by lesser-known architects but interesting nonetheless.

The area occupied by Sant Gervasi-La Bonanova covers what once the historic centre of the municipality of Sant Gervasi de Cassoles.

Discovered by bourgeois Barcelonans in the mid-19th century, this once isolated rural village became a summer resort as rich industrialists built second homes in the area around Carrers Ganduxer and Mandrí.

The neighbourhood extended up the hill and become La Bonanova by the end of the century and there were some very fine houses here.

Two prime example of Modernista architecture, such as Bellesguard by Antoni Gaudí and El Frare Blanc by Joan Rubió i Bellver, remain but most were demolished in the 1950s and replaced with expensive but faceless apartment blocks.

The section of the neighbourhood above Ronda de Dalt extends up into Collserola and is still virtually unspoilt countryside.

Les Tres Torres was open fields between Sant Gervasi and Sarrià until 1901 when three brothers from Sants built a summer home or ‘torre’ in Catalan each and the area started to be developed.

The arrival of the railway line to Sarrià between 1906 and 1916 was crucial to the development of the area as the rich residents could now commute to their offices in central Barcelona and so the population became permanent.

Once again the fine Modernista buildings have been replaced by modern blocks of apartments and, although very pleasant, the neighbourhood lacks personality, in my opinion.

First documented in 986 AD, the village of Sarrià grew in importance as a trade and crafts centre in the 13th and 14th centuries.

Unlike the built up Sant Gervasi neighbourhoods closer to Barcelona, the village retains its historic centre and a strong sense of identity.

This was the first part of what’s now the Sarrià-Sant Gervasi District to be occupied by upper classes as a summer retreat and an idea of the economic power of its residents comes when you realise that the railway to Sarrià opened in 1858 and was one of the early rail connections in Spain.

Similarly, when the other satellite towns around Barcelona were incorporated into the city in 1897, Sarrià remained separate until 1921.

The old village centre has still got a lovely atmosphere and is a great place to stop for breakfast on your way to explore the Collserola hills.

The three centres of Vallvidrera, El Tibidabo and Les Planes constitute one of the largest administrative neighbourhoods in Barcelona in terms of surface area.

The pleasant hamlet of Vallvidrera nestles on the Barcelona side of Collserola overlooking the Vallvidrera reservoir.

The Mountain of Tibidabo is the Barcelona’s favourite spot on Collserola and offers fantastic views of the city.

Home to the famous funfair and the Observatori Fabra it has been a favourite destination for trips and excursions for well over a century.

Les Planes is located on the El Vallès side of Collserola and although it came into existence through uncontrolled building is now a very pleasant village and a lovely place to live.

The Big Wheel at Tibidabo

If you live in Sarrià-Sant Gervasi and need to do deal with official paperwork such as the empadronament, you have to go to the Oficina d’Atenció Ciutadana  orCitizen’s Help Centre at: