A Historical District and a Modern Sports Mecca 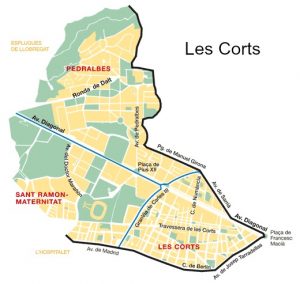 Les Corts, which is Barcelona District IV, begins at Plaça Francesc Macià and runs from this fairly central square along either side of the often opulent Avinguda Diagonal until you reach Hospitalet and Esplugues on the outskirts of town.

In much the same way as Barcelona’s other out-of-town districts it’s much more than it seems at first glance.

The Corts District can be divided into the three smaller barris or neighbourhoods of Les Corts itself, wealthy Pedralbes and La Maternitat i Sant Ramon, which given that it is home to FC Barcelona’s Camp Nou Stadium is the neighbourhood I tend to visit most frequently.

In general, Les Corts is one of Barcelona’s wealthier districts with plenty of office space particularly and some very upmarket residential areas.

It is not obviously touristc but it does have a few jewels in the crown that mean you are almost certain to pay a visit at some point or other.

The neighbourhood of Les Corts spreads out in an uneven wedge from Plaça Francesc Macià along Avinguda Diagonal and Josep Tarradellas as far as Gran Via de Carles III.

This was once the historic centre of the municipality of Les Corts de Sarrià but these days it is hard to distinguish from the Esquerra de l’Eixample and parts of Sants and Sant Gervasi.

It’s now a mainly modern residential neighbourhood and is nice enough with decent bars and restaurants.


Camp Nou and Les Corts
Save

Extending to the left of Diagonal between Carles III and the outskirts of Barcelona lies the neighbourhood of La Maternitat i Sant Ramon centred around the old Maternitat maternity hospital.

The neighbourhood is also home to the Cementiri i Tanatori de les Corts – the local cemetery and funeral service.

The main reason for visiting La Maternitat i Sant Ramon, though, is to go to FC Barcelona’s magnificent Camp Nou complex, which apart from the football stadium includes the museum, basketball stadium and an ice rink.

Nearby you will also find the prestigious Reial Club de Polo de Barcelona and the Campus Nord of the University of Barcelona’s Zona Universitària.

Pedralbes is quite another thing and is the part of Barcelona where the super-rich tend to live.

Founded in 986 AD, Pedralbes was originally known as Petras Albas, or dawn stones, due to the translucent colour of the rock on which it was built.

In 1327, Elisenda de Montcada, the fourth wife of Jaume II, laid the foundation stone of the sublime Monastery of Pedralbes, considered a masterpiece of Gothic architecture and home to part of the world-famous Thyssen-Bornemisza art collection.

Not surprisingly, many of the main streets in Pedralbes are lined with sumptuous mansions surrounded by lush walled gardens.

The privileged children of their owners have it easy as the North Campus of the University of Barcelona is just round the corner.

If you need to do any official paperwork such as the empadronament in Les Corts, you’ll need to go to the Oficina d’Atenció Ciutadana or Citizen’s Help Centre at:

Telephone from Inside Barcelona Metropolitan Area: 010