Sants-Montjuic is District III and is actually the largest of Barcelona’s 10 administrative districts because it includes two uninhabited areas that area not classed as neighbourhoods – the mountain of Montjuïc itself and the enormous Zona Franca and Port industrial area.

The main residential neighbourhoods in the Sants-Montjuic District are centred around the old municipality of Santa Maria de Sants and are Sants, Hostafrancs, La Bordeta and Sants-Badal on the border of Barcelona and Hospitalet.

The dividing line between the Sants and Montjuïc sectors of the district is the section of Gran Via that leaves Plaça d’Espanya.

Here you’ll find a series of four neighbourhoods located at the foot of the Montjuïc Mountain. These are Font de la Guatlla, Marina de Port, the yet to be built Marina de Font Vermell and the emblematic Poble Sec, which borders onto El Raval and Barcelona City Centre.

With a mountain, an industrial complex and port, a historic municipality as well as scattered neighbourhoods in what was once open fields, it is safe to say that Sants-Montjuïc is not only its largest but also possibly Barcelona’s most varied district.

The neighbourhood of Sants was one of the centres for the Barcelona textile industry in the 19th century and to this day is one of Barcelona’s iconic working-class barris.

Until 1897, this was the centre of the separate municipality of Santa Maria de Sants and the area round the town hall still retains a village feel.

However, these days the area is best known as home to Barcelona Sants Estació, which is the city’s main railway station.

The main street, Carretera de Sants, is one of the longest shopping streets in Europe and the neighbourhood really comes alive in the last week of August for the fantastic Festa Major de Sants.

Hostafrancs fans out in a broad triangle from Plaça d’Espanya with Gran Via on one side and Carrer Tarragona and the Nova Esquerra de l’Eixample on the other.

The neighbourhood’s main street is Creu Coberta and local life is centred on the area around the Hostafrancs municipal market and the metro station.

Hostafrancs includes the very pleasant Parc de l’Espanya Industrial, built on the site of one of the neighbourhood’s most important factories and pictured above.

The barri is centred around the old Can Batlló textile factories, which has now been turned over to workshops and small businesses.

Another building of note is the old Magòria railway station located on Gran Via next to the football ground and modern Ferrocarrils de la Generalitat station of the same name.

Divided from the rest of Sants by the Ronda del Mig, Sants-Badal looks more towards Hospitalet than the other Sants neighbourhoods.

Sants-Badal features the very pleasant Rambla de Badal with some fine Modernista buildings and local life is centred here and around the Plaça de Oliveret. 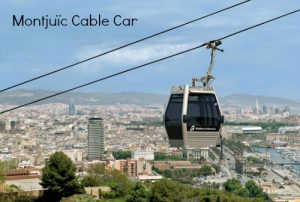 Because it contains no residential areas the Parc de Montjuíc, which includes the whole mountain, is not technically a neighbourhood.

Providing a very necessary green space just outside the city centre, Montjuïc is popular with Barcelonans and tourists alike and features museums, sports facilities and parks.

Developed in three stages during the 18th century, before the 1929 Universal Exposition and in the run up to the 1992 Barcelona Olympic Games.

The most famous monuments are probably the castle, the Palau Nacional housing the Museu Nacional d’Art de Catalunya and the Olympic Stadium.

Located on the Montjuïc side of Avinguda Paral.lel, Poble Sec is an iconic working-class Barcelona neighbourhood and its proximity to the Barcelona City Centre has always made it a cultural melting pot.

It is famous amongst Barcelonans for its variety theatres, such as Teatre Apolo and El Molino, and throughout the 1940s housed a number of celebrated brothels.

Moving round the foot of the mountain to the other side of Plaça d’Espanya, Font de la Guatlla is tiny residential neighbourhood on the left of Gran Via opposite the Sants neighbourhoods of Hostafrancs and La Bordeta.

Most of the accommodation is modern apartment buildings apart from a rather pleasant cluster of English-style two storey houses alond Carrer Dàlia further up the mountain.

Once open fields that backed onto the as yet undeveloped Port of Barcelona, Marina de Port is made up of a number of different micro-neighbourhoods that grew up to house workers from the Zona Franca factories in post-war Barcelona.

However, Marina de Port is home to one of the few remaining traditional Catalan farmhouses in Barcelona as well as the infamous Can Tunis, until recently the city’s main stop off for heroin addicts.

Backing onto the port, Marina del Prat Vermell is yet to be built.

Once completed the barri will consist of 30,000 newly constructed homes covering an area of some 80 hectares.

The new neighbourhood will be connected to Marina de Port via Passeig de la Zona Franca and the rest of Barcelona by the extension of the L9 Metro Line.

Like Parc de Montjuïc, Zona Franca-Port is also not technically a neighbourhood because it is an industrial and logistics area rather than a residential one.

The area really took off in the 1950s, when factories like SEAT, literally became the motor behind Barcelona’s growth and the Spanish economic miracle.

Manufacturing still takes place but taking advantage of its location between the Port of Barcelona and Barcelona-El Prat Airport, the Zona Franca’s main activity today is logistics.